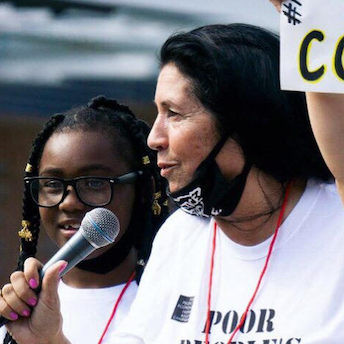 Cheri Honkala is a nationally and internationally recognized anti-poverty and human rights advocate. Honkala gained fame when she was a homeless mother, breaking into abandoned government-owned houses and occupying them in order to survive. She has traveled internationally to meet with peasant movements and revolutionary leaders, and has appeared in numerous films that highlight her work. Honkala was most recently instrumental in launching the Poor People’s Army, which seeks to build a nonviolent force outside the nonprofit industrial complex that can challenge corporate power and reclaim the basic necessities of life for poor and working people. Front Line Defenders has named Cheri one of the 12 most endangered activists in America, and has human rights defender status in Ireland.

For the past 3 decades Honkala has dedicated her life to creating a movement led by the poor, not their advocates. She has learned through many hard experiences that a movement to end poverty and homelessness must be independent of corporate money and independent of the corporate-dominated two-party electoral system. With the organizations she leads, Honkala has organized numerous protests and demonstrations, held some of the largest marches at the Republican and Democratic National Conventions, and set up tent cities, and housing and building “takeovers.” In the course of these activities she has been arrested for civil disobedience violations more than 200 times.

In her early years, while still living in Minnesota, she formed the Twin Cities anti-poverty groups "Women, Work, and Welfare" and "Up and Out of Poverty Now.” After moving to Philadelphia in the 1990s, she co-founded of Kensington Welfare Rights Union (KWRU) which later turned into the Poor People's Economic Human Rights Campaign (PPEHRC) and is now a national group.