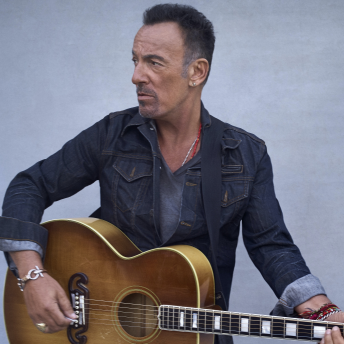 Bruce Springsteen’s recording career spans over 40 years, beginning with 1973's Greetings from Asbury Park, NJ (Columbia Records). He has garnered 20 Grammys, won an Oscar and a Tony, been inducted into the Rock and Roll Hall of Fame, received a Kennedy Center Honor, and has been a MusiCares Person of the Year. Springsteen’s memoir Born to Run (Simon & Schuster) and its companion album Chapter and Verse were released in September 2016, and he was awarded the Presidential Medal of Freedom in November 2016. His historic 236-show run of Springsteen on Broadway at Jujamcyn’s Walter Kerr Theatre from October 2017 to December 2018 also yielded an accompanying soundtrack album and Netflix special. In 2019, Springsteen released Western Stars and together with longtime collaborator Thom Zimny he co-directed a feature film of the same name released through Warner Bros. In 2020, Springsteen made frequent guest DJ appearances on Sirius XM’s E Street Radio channel and released Letter To You, a new studio album with the E Street Band “crafted for just this moment” (Entertainment Weekly) that debuted at #1 in eleven countries alongside an accompanying documentary from Apple Original Films.